Here are some pics from s’Hertogenbosch to round off My World Cup Dressage Diary.  Will be starting a new diary shortly as we move on to the next challenge!

Thanks for being part of this adventure so far.  Great to have you along for the ride.

Been a little tricky over the the last couple of days as you may have seen if you caught up with the live FEI TV! However we recovered well in the Grand Prix Freestyle today and I was delighted how Bastie went.

In the Grand Prix, Jaybee Alabaster just kind of froze in the arena as he was scared and a bit overwhelmed by the whole atmosphere.  Alabaster couldnt understand what the TV screens were and that put him off.  Above, there was a score board that kept changing as the scores were put up for each movement and during the one time changes, Bastie caught the light changing above him and freaked. However, there were too many  errors in the Grand Prix test.  Not a great test and we were all disappointed. As Richard Davidson, from Great Britain kindly said in his commentary, “…the horse is a much better horse than he is showing in the Grand Prix today.  He is really under performing.”

However this morning, before the freestyle, we had a bit of a tune up at 7.00am in the main arena again.  Alabaster allowed me to help him heaps more and didn’t get so cranky with me when I helped him. Our test was soooooo….. much better. I could keep his concentration easier and he really tried to do the right thing. We did come ahead of the USA and Polish riders which was nice. So maybe I had better luck. One judge was a little harsh I thought, but from being first out today we did recover a lot of ground over yesterdays performance and did a much better job for Australia and ourselves.

Congratulations to Adelinde and Parzival!  They were brilliant and very inspiring. 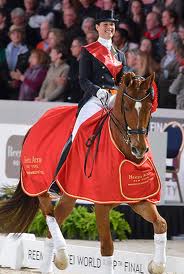 The organising committee were very very helpful and wonderfully kind to all of us from “Down Under”, as they say.  Even with our silly questions they were super generous and made us feel very welcome.  A very big thankyou to the organisers of the World Cup Dressage  Final in s’Hertogenbosch for their wonderful support during our time at the show.

Many thanks to all my supporters in Australia. It does mean soooo…. much to have the support from back home. Sorry I let everyone down in the Grand Prix, but I feel we did redeem ourselves and Australia in the Grand Prix Freestyle today.

Alabaster having a quiet couple of days. Next weekend is Hagen and then Mannheim, which is the first Aussie Olympic qualifier for the London Olympics.  At Hagen there is expected to be quite a few Aussie competitors and supporters.  See you there.

If you want to see the full Draw for the Dressage World Cup Final and keep a tab on the results check out this link:

Jaybee Alabaster went great in the horse inspection at 7.00am this morning. Patrik Kittel did the trot-up with Alabaster as my knee is better, but doesn’t like twisting too much. Had a ride in the main arena till 8.30am. All the horses went into the arena familarisation at the same time, so a lot of horses all going together. Alabaster a little afraid of that, but I gave him time and he went well.

This afternoon, another little walk under saddle and the Grand Prix draw. Can’t wait to find out when I am riding tomorrow. It’s lovely and cool in the stable area and out of the the weather as we are inside a gigantic hall. Once you start heading towards the main warm up arenas throughout the  adjoining halls, it gets warmer and warmer and warmer. The whole place is heated. In the main arena it was warm enough to ride in a t-shirt only. I didn’t take my jumper off though.

Alabaster has settled in really well. Not too many people around today, but it is getting busier. Tomorrow will a be crowd like Sydney Royal on Good friday. It is amazing and exciting to watch the worlds’ best trainers and riders and horses. It has been really lovely to catch up with people I haven’t seen since the World Equestrian Games in Kentucky. It is a wonderful yet so relaxed atmosphere around the stables and training sessions.

As I wrote in the first episode today I was going to ride Jaybee Alabaster at 9.30am.  Well I did with some painful consequences!  Imagine this: extended canter about to flying change, 1 hare and 2 very fast dogs all going head-on in the arena. I didn’t see it coming and neither did Alabaster. Poor thing got the fright of his life and YES guess where I ended up. In 3 seconds all over. Not too badly hurt tho. Still able to ride, but not sure about running in trot-up with very painful knee. Patrik to the rescue. YEAH!  The most important thing tho, is I didn’t break Clemens headset!  You know how very protective he is of his headset!  Broken bones OK but not broken headset!

Quite funny in hindsight as I’ve been wondering what it would feel like if I came off after over 10 years of no falls.  Just shows: “Be careful what you think about…..”

After all that first up, today went well with our arrival in s’Hertogenbosch. The venue is awesome and hopefully tomorrow some pics of around the main arena and behind the scenes stable area. Thankyou to Equestrian Australia who did a great job organising the hotel, stabling and accreditation. Alabaster had a very short ride late this afternoon to give him a quiet leg stretch and let him see the venue little and also to check how my knee was to ride.  After my fall, I got back on at home, but then drove for 2 1/2 hours in the car and it was really painful. All ok when I ride, but hell to walk on. Hopefully after a rest and icing tonight I will be brand new in the morning. Horse Inspection (Trot Up) at 7.00am in the morning (Thursday 19th) and then arena familarisation for the main arena 7.00am-9.30am. Maybe after that we can fit breakfast in and a quick look into the shopping areas and the CDI4* starts around 10.00am. Hoping to catch up with Bev, Jaybee Alabaster’s owner tomorrow. Action filled day and there are alot of Aussie’s at this show. Will be great to catch up with them all.

I’ve been asked what preparation I am doing this close to the Dressage World Cup and really it is pretty much the same as for any major competition.  And that is keeping to the basics of submission and suppleness.  If the basics are good then the rest follows. 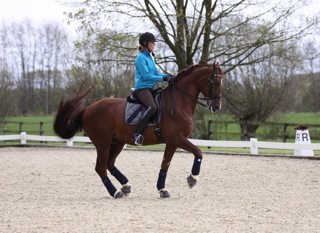 When a big show is almost upon me I go through a phase of slight panic, doubts and second guessing – thoughts like “What am I doing here?”  and  “I am not going well enough to turn up to a big competition.”  It’s a phase I nearly always go through and I am always hopeful that it will not be true.

With only a few days to the World Cup I have to say that this “phase” of slight panic is setting in. It’s as if I am waiting for something to go wrong – what, I don’t know.  It is not easy.   Its strange but it seems I have to get through this uncomfortable “phase” to be fully ready for the event.  Fingers crossed that Jaybee Alabaster and I are ready, and ready at the same time.

So how am I coping?  As always, with Clemens Dierks help – he is very good at keeping me thinking and riding.  The basics – submission and suppleness.  If the basics are good then the rest can’t be too bad. 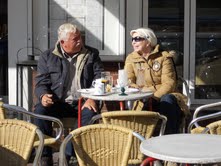 I find spending time with my family – sightseeing and lunch in some lovely places, helps me keep a balanced outlook.  Having my life revolve around only one horse to ride can make me a bit “loopy”, so being busy also helps and we are now preparing for the move to s’Hertogenbosch.

The photo is of Mum and Clemens recovering from a lesson I had!